I am directionally deficient.

I’ve heard people lacking in directional ability described as “challenged,” but for me it goes way beyond that.  I can, quite literally, walk (or drive) to a location and mere hours (and sometimes only minutes) later leave said location and head in the exact opposite direction from the one that brought me there earlier.  It drive B bonkers.

I resigned myself to this disability many (many) years ago and I am totally unphased by driving miles out of my way, realizing I’m supposed to be going north, not south, and then having to turn around and go all the way back just to begin again at my original starting point.  Like most weaknesses in humans I have managed to adjust (leave earlier) or adapt (have Google maps perpetually “on”). 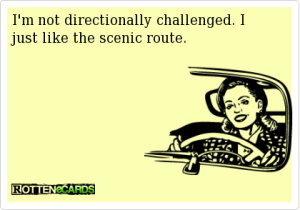 On the other hand, I get the law. I am totally comfortable with the direction I need to be heading when researching, writing, and arguing the fine points of most legal arguments.  I never have to backtrack (or almost never).  When I am handed a legal problem it feels like shrugging on a well worn and well loved jacket that I can trust to keep me warm on a chilly night. I know it. I understand it. I feel strong and powerful and smart and competent surrounded by it.

And then there is parenting.  Some days I feel worse than deficient. I feel totally and utterly unqualified to be parenting the remarkable human child who is CJM.  Other days (well, maybe not whole days, let’s say fleeting moments) I feel like maybe I’m getting it right, maybe I do “get” it and C might turn out pretty ok despite my lack of training and qualification as a mother.  It’s a total crapshoot as to which of these wildly divergent feelings I will have at any given parenting moment – sometimes I feel both at exactly the same time.

Two nights ago C and I watched Little Mermaid together.  She is Disney Princess obsessed (much to my chagrin), but she had never watched the movie.  On our way home she announced, “Mummy, I am not afraid of the sea witch any more so I would like to watch Ariel tonight.”

Ok by me, I love the Little Mermaid.

So we watched the whole movie and she was, true to her word, not afraid of Ursula. Then came the end of the movie – you know, Ariel and Eric get married, there is great rejoicing, everyone is happy? Everyone, that is, except C, who burst into hysterical and inconsolable sobs, tears streaming down her face as she crawled into my arms and wept.

“I don’t want Ariel to have to leave her Daddy,” C replied wailing.

“But she’s grown up (aside here that for the first time I realized at the beginning of the movie that Ariel is 16!!! – so not grown up at all…but for purposes of this discussion I’ll ignore that disturbing issue…) and she found Eric who she loves and who loves her and they got married and her Daddy is happy for her.”

C shouts, “But the Sea King will be ALL ALONE without Ariel and she will MISS HIM!”

This went back and forth for quite some time until finally C threw up her hands (literally) and said “I don’t want to be a grown up EVER.”

Hmmm…me either kid, me either.

I still don’t know what the right response to all this was.  I used all the logic, reasoning and rational thinking I could muster, but C was having none of it.  So I ended that evening feeling totally incompetent.  The problem is that now I’m “retired” from the law – or at least from my firm – the opportunity to shrug myself back into feeling competent is receding from my grasp, so I went to bed still feeling incompetent.

Two weeks ago I would have gotten onto the computer and boosted my ego with a little legal work.  Instead, now I’m left with running errands all over the city in preparation for our move (7 WEEKS AWAY) which inevitably means that at least once a week I get on the Metro going the wrong direction, or walk/drive miles out of my way trying to find something I need.  And I’m left with parenting.

It turns out that I am starting to think this will be the largest and most significant struggle of this lifestyle change for me: the percentage of time I spend feeling lacking and stupid v. the percentage of time I feel smart and competent.  Cause it also turns out that we all – even very grown up and outwardly successful people – need to feel competent a few times a day to prevent the dissolution of our egos into mush.

As I work through these feelings, I am having a lot of sympathy for B because I’m pretty sure he’s been feeling like this for the last 30 weeks.

Learning a new language is humbling. B, and the other folks he joined the Foreign Service with are smart, smart people. They are, I’m guessing, not used to feeling stupid or incompetent in very many situations. But spending 6 hours a day learning a new language from scratch is a breeding ground for feeling incapable.  For weeks now B has been warning me that he would not pass his final French test.  He swore he believed he would not get the 3/3 (oral/reading) score he needed and we would be in D.C. for another 6-8 weeks.  So I was resigning myself to a lot more time in D.C. – this time without a job – and I was a bit panicked about trying to find something to keep me occupied and not feeling incompetent. But it turns out that B was not French deficient, as he had feared.  He got his 3/3 on the first try and so all of a sudden (it feels very sudden since I had been trained to expect an extra 2 months of prep time) our departure date is looming – we are wheels up to Kinshasa on July 26. 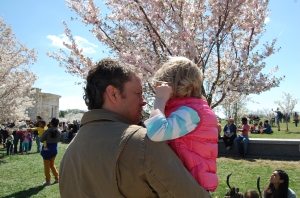 B: Competent in French and Parenting…

I’m going to work on new competencies now – organizing boxes of shipments, sewing, writing, transporting 70 lb dogs 6,500 miles – but will all of those help me to feel mildly competent when my main role will be to parent – and, in seven weeks, to speak French in a country as vastly different from here as possible?  I don’t know, but I sure hope so…