B is shaming me into a blog post. Last night as we were watching TV he looked over and said “You know, I used to read this abcdadventure blog, but I haven’t seen a post in a long time…I wonder what happened to it?”

Sigh. What happened is life in Kinshasa. I feel like I am always running to catch up these days. I actually have three half (or almost fully) written posts that glare at me accusingly when I log onto the blog, but I can’t seem to find the time (or maybe muster up the effort) to get them finished, get photos uploaded and get them posted. Or, when I sit down to get them finished it has been long enough since I started writing that the timing is all off.

This all started in the fall when I started working on Christmas presents. I finally started sewing, but I couldn’t really blog about it because everything I was sewing was going to be sent stateside as a present, so I couldn’t show any pictures without ruining the surprise. Since I was also sewing like a crazy person I was also not writing about anything else, and so it began, the slow decline into a monthly blog post instead of a weekly one.

One of the dresses I made for a Christmas present

I’ll try harder, promise. For now, I’m going to work on finishing the three pending posts so be careful what you ask for all of you who keep wondering when the next post is coming, because there may be three or four in short order! So, without further ado, the post I started two weeks ago (and finished this morning):

It’s been a week of firsts for me in the Congo: first boat trip up the Congo River to lounge on a sandbar, first trip to the “Marble Palace” to see where Laurent Kabila was assassinated, and my first car accident.

My journalistic training would tell me to start with the most important of these firsts, but I’m hard pressed to identify which one wins that title. I’m sure most readers are thinking that an accident has to top the list. And, from a strictly journalistic perspective injury and destruction usually trumps everything else, but in this case there were no injuries (thank heavens) and, relatively speaking, little destruction, and, basically it was just like an accident anywhere. Well, other than my fleeing the scene…

It really was very bland as accidents go. I was driving down the road toward the embassy and a pick up truck backed out of a roadside parking space and hit me. We’ve been taught not to stay at the scene of an accident in Kinshasa if we can help it. Instead, we make our way immediately to one of the “safe” locations for US diplomats. For me, the embassy was very close by, so I just kept moving.

A man ran up to the window and started shouting “arrête, arrête!” but I ignored him. It didn’t actually sound that bad when it happened; it certainly looked worse than it sounded when I finally laid eyes on the damage. Once I got to the embassy and got out of the car I could see that the back panel of the car had been ripped off, so maybe he was just trying to get me to stop so I could pick up the piece of my car that was apparently lying in the road, but then again, maybe not.

Americans = rich in Kinshasa, so even when an American driver is not at fault in an accident (as in my case) a crowd can gather quickly and tensions can escalate. We even have special cards made up that explain in French and Lingala that we will not leave the car, we will be driving away and if the person needs to contact someone about the accident they should reach out to the embassy. I didn’t even bother with the card given the circumstances of my accident, I just kept on going. The embassy guards and I drove back over to the area in their truck about 20 minutes later, but the pieces were long gone.

“Wow,” I said (in French). “That piece was pretty big, I’m surprised someone took it.”

In other words, “for the street children (called Chegues here (pronounced shay-geys)) nothing is impossible.” One of the drivers in our compound has even suggested that if we take the car somewhere local to have it fixed we may find that we get our own part back – at a price of course. I’m just glad that the damage wasn’t worse and that no one was hurt in either car. Fingers crossed that is my first AND last accident here.

The next weekend was a four-day weekend for Americans in Kinshasa as Friday was a Congolese holiday (Heroes Day) and Monday was MLK. Heroes Day is really two days. One in honor of Patrice Lumumba, the first prime minister after the end of colonialism in 1960 who was assassinated on January 17, 1961, and the other in honor of Laurent Kabilia, who was President of the DRC after overthrowing the military dictator Mobutu Sese Seko. Kabilia was the father of the current president, Joseph Kabilia, so he is often referred to here as “Papa Kabilia.” He was assassinated on January 16, 2001. Every year on January 16 the DRC government opens the so-called “Marble Palace” where Papa Kabila was assassinated to the public. The room in which he was shot has (allegedly) not been touched since that time and you can still see bullet holes in the chair he was sitting in. We decided it was worth the wait to see the palace, though it is not much of a palace and I’m not sure what (if anything) was made of marble. Either way it was interesting and I’m glad we checked it off our list, but we won’t be going back again next year, so that’ll be a first and last for me as well. 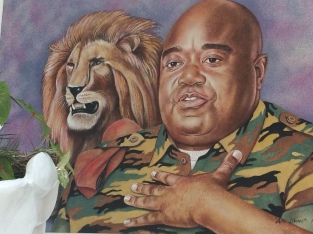 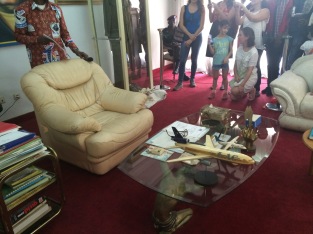 The only first that I hope gets repeated at regular intervals was the amazing trip up the Congo River. This was our first “sandbar” outing as well as our first time on the river proper. Typically (apparently) you are only on the river for 20-30 minutes before a suitable sandbar is found for lounging. However, there has been so much rain lately that it took us almost an hour and a half to find a sandbar big enough to accommodate the 25+ of us who went out on the trip. The ride was worth it – and was amazing and beautiful in and of itself. Once on the sandbar, tents and tables were set up and the boat crew set up a grill and cooked the meat and other food we brought with us. We drank beer and ate hot dogs while the children played in the sand and the shallow water. I took my first official “swim” (more like drifting in the current) in the Congo River and if I could go back again this morning I’d be on my way. 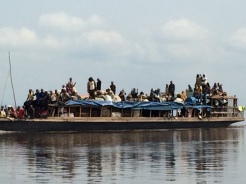 Pirogues on the river 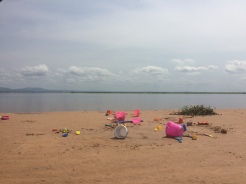 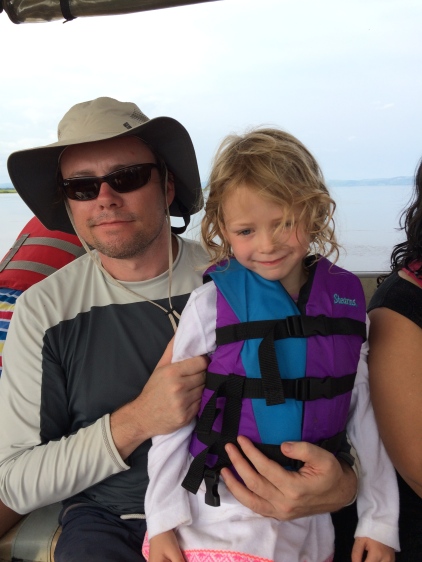 Instead, we’re enjoying another lazy Saturday morning. C is coloring, B is watching football (“soccer” to the Americans) and I am FINALLY finishing a blog post. Certainly not our first Saturday morning like this, and I have no doubt we’ll enjoy many more such mornings while we plan the next “first” in our Congo adventure.

4 thoughts on “Running to catch up”