The dry season is in full swing in Congo right now, which means cool nights and not-too-humid days. It’s been bizarre seeing people talking about the sweltering heat in the US and Canada right now while we (or at least I) need sweaters to sit out at night. Dry season also means making plans with a 100% guarantee that it will not rain on our parade, or party, or whatever.  So we, along with some friends, decided that this was the perfect time to take our first stab at camping – Congo style.

I grew up camping several times per summer, but once I got out of college I could probably count my camping trips on one hand. I’ve missed it. The smell of wood smoke in your clothes, the taste of almost burned marshmallows,  waking up to birds calling and a layer of dew coating the world.  But B has never known me as a camper, and I don’t think he really believe me when I have said on occasion over the last ten years that I wanted to go camping. You can’t blame him, really. I’m a shopping and pedicure kind of girl most of the time. Case in point, I took C this morning to get her hair cut and we had our first (of many I hope) mommy-daughter pedicures. 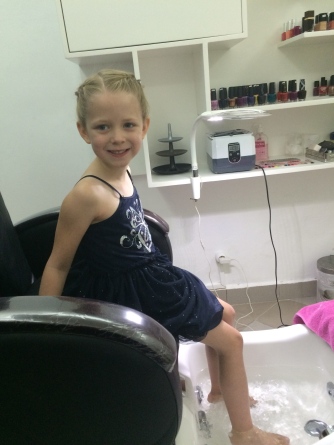 But I’ve never found it that difficult to juggle being a girl who likes pedicures AND getting dirty on a camping trip, so for ten years I have insisted to B that I really do like – and want to go – camping. It wasn’t until other adventurous friends of ours (the same ones who joined us on the train adventure) suggested camping at a national park outside Kinshasa that B was apparently willing to test out my assurances.

One of the worst parts of traveling anywhere to do anything around DRC is that the roads are abysmal. Think of the worst road you have ever been on in the US and then multiply that times at least 50 – and then put it right in the middle of the capital city of the country.

I’ve posted pictures of the roads before, but they bear reposting to emphasize my point. The picture above is the road between two U.S. Embassy compounds. Seriously.

BUT, the road between our house and Bombo-Lemene, our camping destination, was PAVED. All. The. Way. Like a miracle from above. Seriously.

It still took us about 2 hours to get from home to the park, but in DRC to drive 105 km in 2 hours is nothing short of amazing. By way of comparison, Zongo Falls, where we went last Labor Day, is 101 km from home and that took us about 4 1/2 hours to drive in whiplash inducing conditions.  Don’t get me wrong, there were still a lot of very interesting sights on the drive, but at least we could look at them without risking injury. 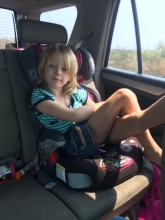 Relaxing on the NOT bumpy drive

Yes. Those are goats. 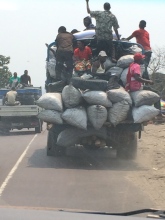 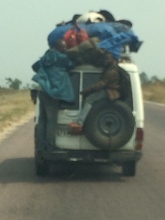 You can always fit a couple of extra passengers

When we arrived at the park we drove down a long two-track path to get down to the river.  I’m not sure which river – either the Bombo, or the Lemene, since the park is named for the confluence of the two, but whichever one it was we enjoyed tubing down it (B), playing in it (C) and dipping toes gingerly at the edges of its cold depths (me). The bridge over the river made for plenty of heart-pounding back and forth as well. It was made of bamboo or rattan with random weak spots and a perilous tilt toward the water below, but after only one hand-holding crossing C was ready to tackle it on her own. 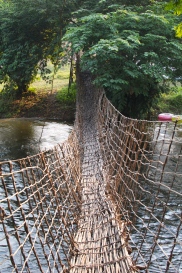 I think by the time I’d pitched the tent, B was starting to believe that I might be ok with camping, though I don’t think the full revelation came until the next morning when I made toast over the fire using a fish grilling basket. I suspect I’ll get to combine my love of shopping with my love of camping now because heaven knows we can’t be the only people on the continent of Australia in 2017 who are not fully kitted out for camping adventures. 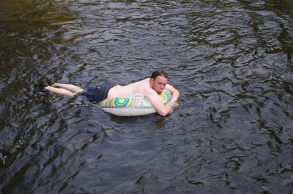 On our way back to Kinshasa we made a fascinating detour. Scattered throughout the country are various palaces and other monuments built by the DRC’s former military dictator, Mobuto Sese Seko. The most well known is Gbadolite, the town where Mobutu was born and where he built an elaborate series of palaces and, among other things, a runway large enough to accommodate the Concorde. Gbadolite is on the border with the Central African Republic and about 1,000 miles as the crow flies from Kinshasa, so we won’t be visiting there anytime soon. Much closer to home, however, is Mobutu’s Pagoda.

The Pagoda was built in approximately 1971 as part of the Mobutu’s Presidential Domain at N’sele. Mohammed Ali allegedly stayed there when he came to Kinshasa to fight George Foreman in the Rumble in the Jungle.  Mobutu was overthrown in 1997, but the Pagoda seems to have started its decline long before that. Now the only human inhabitants are the guards. Camp cots covered in mosquito netting are set out along the hallways with dented tin plates beside them, evidence of the thankless task of living in, and guarding, a ruin. The guards were friendly enough when we arrived, though did make it clear that, while they had no problems with us wandering around and taking pictures, it would cost us something to do so. 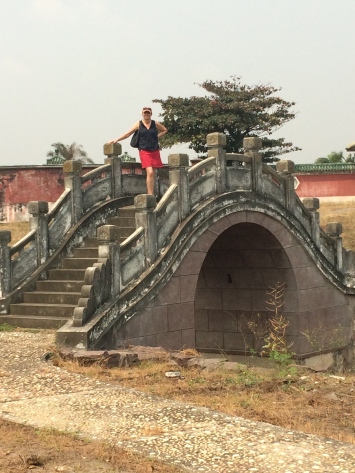 I wish I could juxtapose the Pagoda now – overgrown with weeds, graffiti-covered and littered with beautiful pieces of the elaborate Chinese pottery that graced the roof, eves and columns – with the Pagoda when it was built, but I wasn’t able to find a single picture of the original structure online, so you’ll have to make do with pictures of its current state. The ghost of its former glory is there – in the paintings on every beam over the walkway surrounding what used to be a small lake – each one different from the next, and in the attention to detail evident on the carved columns and railings.  We found a dumb-waiter as we were walking around and told the guard it was for food. He laughed. In one of the most destitute countries on earth its hard to do anything but laugh about a man who needed an elevator for his food when most of his subjects didn’t have anything to eat at all. 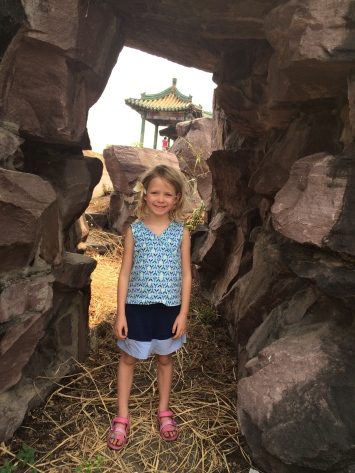 The rains will be coming back again in about a month, so we’ve got a few more weeks to check off some more outdoor activities without worrying about getting wet.  Of course, the flip side to avoiding rain is not being able to avoid dirt and sand, but dirty feet require pedicures, so it all works out fine for me.