During the two years that I attended boarding school in Toronto, my parents lived only two hours away in a small town called London, Ontario. I went home almost every weekend, either taking a Greyhound bus or the train. I had nothing against the bus, it actually arrived in almost exactly the same time as the train (about 2 hours one way), but there was nothing magical about taking the bus. I got on, I sat down, I looked out the window and, about 2 hours later, I arrived. It was not perceptibly different than driving in a car except for a (usually disgusting) toilet in the back of the bus avoiding the need for highway rest stops. Nowadays there appear (though the windows I pass by as I haven’t actually been on a bus in many, many years) to be TVs and other entertaining accoutrement, but in the 70s I took a book with me, I sat down in my seat at the bus station in Toronto and I waited until the bus stopped in London.

But there was – and is – something magical about taking the train. Something old school and other worldly and freeing. Can you imagine if Harry Potter took the bus to Hogwarts? Not the same image, right?

I loved the train when I was in boarding school. I loved being independent enough that when I was 11 years old in my first year in boarding school I was allowed to take a taxi from school to the train station all by myself. That I was allowed to buy my ticket, find the gate and get on the train by myself and start my weekly journey home to my family. As a 40-something year old adult now, the idea of sending my 5 year old to take a train by herself in only 6 years is terrifying, but to my parents’ credit, they trusted me and believed that I could manage alone after taking my first voyage to the school with my mother (which was a doozy…).

In the years since I left boarding school I have taken the train all over Europe and once or twice up and down the “Acela” corridor in the US (Boston –  New York – Philadelphia – Washington DC) and it has never lost its magic for me. On a bus or in a car what you see is highway, but a train often puts you in the middle of a completely different landscape and allows a glimpse at a world that is perceptively different than the world you see from the road.

When we first arrived in Congo there were no passenger trains running from Kinshasa. None. It’s hard to find accurate information about when the last passenger trains ran, but it is clear that in 2006 a Chinese company (likely in exchange for mineral rights…) entered an agreement with the DRC train authority (ONATRA) to renovate the track, trains, telecommunications, signal system and electric supply. In the ten years since then they have, apparently, been working on these renovations because over Labor Day weekend when we traveled to Zongo Falls we saw a passenger train. I felt like Tattoo on Fantasy Island screaming “LOOK, B, a TRAIN, a TRAIN!” 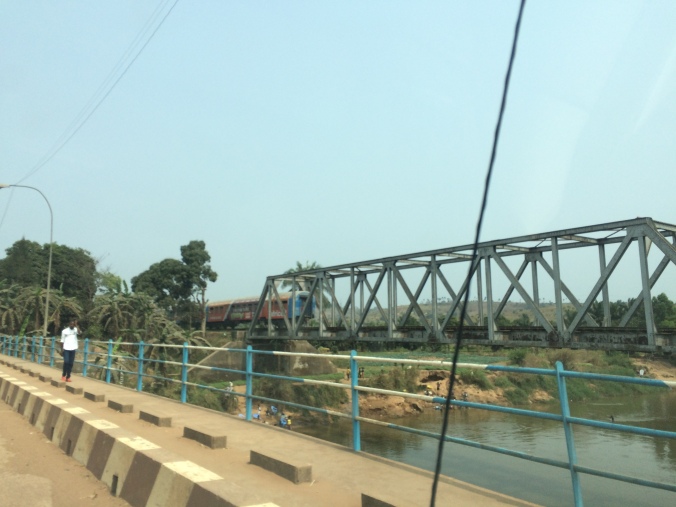 It probably seems crazy to any American, Canadian or, certainly, any European, but you just do not see trains here and our whole group was abuzz. A few weeks later when we visited the very first locomotive in Congo during our Kinshasa tour, we found out that passenger trains had started running in late August meaning that the train you can just see the back of in the picture above was one of the first passenger trains to run on these tracks in almost 10 years. 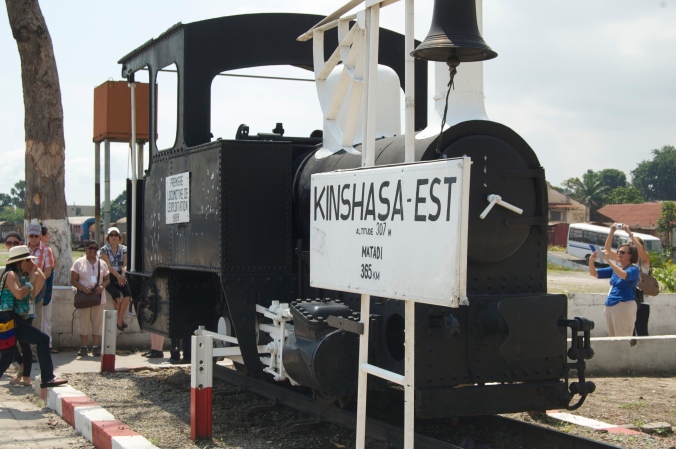 Well, not surprisingly to anyone who knows B or me, we immediately started discussing when, and whether, we could take the train in the Congo. Luckily for us, we have friends who have a similar sense of adventure as we do, and when they asked if we might be interested in joining them on a train trip we jumped at the chance.

The train goes from Kinshasa to Matadi, the chief sea port in the D.R.C., but that trip takes 7 hours, leaving early on Saturday morning from Kinshasa, and returning early the next morning from Matadi. As we were planning to drag C and our friends’ two small children along with us, two days and 14 hours of traveling – even by train – seemed like a bit much. Luckily for us, one of the train’s five stops on its 7 hour journey is Kisantu-Inkisi, the location of the D.R.C.’s largest botanical gardens AND the Mbuela Lodge, a relatively “first world” resort. Bingo – a 2 1/2 hour train ride and a night at a nice resort.

One of our friends went down to the “Gare Centrale” (or Central Station) to pick up the tickets, and then his wife and I followed along with our passports to register with the DGM (or Directeur Générale de Migration) who was sitting at a table under a tree beside the brand new train station.  You cannot buy a round trip ticket, so we had to go to the station in Kisantu before the train’s scheduled arrival on Sunday to buy our return tickets. The tickets were not overly cheap (but nothing really is here), but they also weren’t overly expensive given the novelty and fun of getting to ride on a train in the Congo.  A one-way ticket to Kisantu was $38 for the adults and $23 for the children over 4 (only C on our trip). So not too bad for a 2 1/2 hour trip which included breakfast on the way there, lunch on the way back, lots of A/C, a movie and amazing views of the Congo countryside.

Inside of Classe Luxe 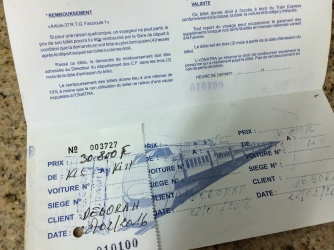 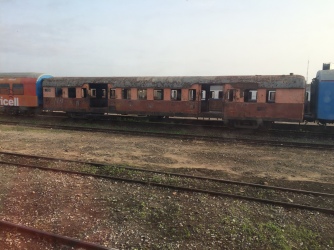 NOT the train we rode on…

While the countryside was really lovely, the train took us far closer to the enormous slums and shantytowns that are scattered through, and on the outskirts of, Kinshasa. On the way back, I filmed several and, though it was raining, the extreme poverty is obvious and devastating to see, particularly as you sit on the luxury car of a train for a price that most Congolese don’t make in a month. Despite this, the children lined the path beside the tracks waiving and smiling and jumping up and down, proving the magic of trains for children everywhere.

When we arrived in Kisantu we called the lodge and, in Congo time, they picked us up and ferried us back to their property. It took a little while to get our room ready (despite the “first world” appearance of the resort the booking and confirmation process leaves a little bit to be desired and a lot of people we’ve talked to have told us that “losing” reservations is commonplace), but eventually they did find us somewhere to sleep.

Kisantu is also home to a 7,000 acres Botanical Gardens that are, somewhat surprisingly, quite lovely. Clearly the people in charge have not let the lack of money, and the myriad of other problems the D.R.C. has experienced over the years, dull their enthusiasm for keeping the Gardens in relatively good condition. There were also two crocodiles – one huge and one tiny – and a baboon as the last vestiges of a by-gone zoo.

Mbuela Lodge is nice, and not nearly as expensive as Zongo was, so we definitely enjoyed hanging out there by the pool, playing mini-golf and having a nice meal (though it was also brought to us in “Congo time.”) There was a great indoor play area for kids, as well as four-wheelers you could rent, and a stable with quite nice horses that you could ride for a fee. C got on her first horse (v. pony) and looked like enough of a natural up there that we may have to take her to the local riding stables now that she is five. 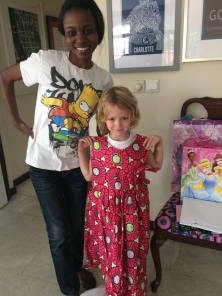 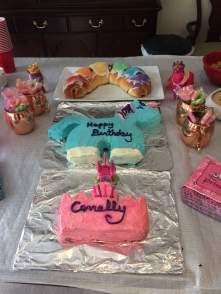 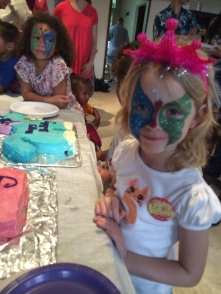 Oh yeah, C turned five in Congo! We had a great “Princess Unicorn” party the weekend after our train trip complete with Princess bouncy house, a unicorn cake, a crown cake and a rainbow king cake, all made by me (yes, I was channelling my inner SAHM). Unfortunately, soon after the kids came inside for a lunch break the skies opened and the “Rainy Season” lived up to its name for the next six hours short circuiting the bouncing and outdoor play but, luckily, not dulling the high spirits of the birthday girl.

At the end of this week we head out on our first “R&R” – the required time we have to take to leave the D.R.C. and experience some “first world” living for a few weeks. Over our two year tour we get to take two “R&R’s” and this is our first one. We are headed to visit B’s family in Florida, including a two day trip to Disney (heaven help us – in the middle of Spring Break/Easter…), a visit from B’s grandmother from Minnesota, and a three day get-away for B and me with a bunch of our Charlotte friends. We are VERY excited, though even with three weeks we don’t have time to see and visit half of the people we’d like to see, so our excitement is tempered with some disappointments. It’s going to be a wonderful, but bizarre three weeks as we walk and drive freely wherever we want, drink Starbucks to our hearts content, and play in the wide open green spaces available to us. But as wonderful as it will be (and I know it will) I also know we will be excited to come back to Kinshasa, to our home, to Miller and to the next adventure that awaits us here.