Ok, yes, I know, this post is a little late.  It’s probably become pretty clear in the last few months, that B did, in fact, “graduate” from his A-100 (the 6-week entry level orientation class for FSOs), get sworn-in, and move into language training.  Nevertheless, I feel that I owe him (if not his parents) a post commemorating the actual ceremony.  I really do have a good excuse for my delay – as you will see below, B got the opportunity to take a snap with his boss’s-boss’s-boss’s-boss – The Secretary, and I was waiting for a better version of that picture, but, it turns out, no one has any idea where that “better” picture is, so it’s time I gave up the wait and went ahead with this post.

For most new foreign service officers the anticipation for A-100 is HUGE.  For us it was, truly, years in the making.  B took (and passed) his first written FS test (the FSOT) in 2009.  I remember him logging into the State Department website from a train station in Hamburg so he could register for the test.  We were on our way to Copenhagen after a week long driving excursion around Sweden, Belgium, France and the Netherlands courtesy of Volvo.  We had just dropped our new Volvo off at a port outside Hamburg so that it could be shipped back to Charlotte for us. B was anxious about getting a test date that suited him, so we found an internet cafe and I looked over his shoulder as he picked a date in October to take his first test.  It felt like an important moment, and, I suppose, you could say “the rest was history.”  But, in this case, history repeated itself (over and over again) until he was invited to the Oral Assessment in 2013 for the first time, and then again in 2014 for the “money” OA.  The oddest thing is that B never actually “failed” any test – he passed every FSOT, and he passed both his FSOAs, but in the interim he just didn’t make it passed the mysterious PNQ’s (Personal Narrative Questions).  In any case, from 2009 until June 5, 2014, all we had really hoped for was B getting into an A-100 class.  That was the prize – what happened after that was, frankly, somewhat vague and, even more frankly, something so far into the future that we never talked about it.

Similarly, once you are actually IN an A-100 class the only thing people are really focused on is Flag Day.  It’s the day everyone is worried about, anticipating with excitement and dread, and spending hours researching.  But Flag Day is not the end of A-100.  Although far more family and friends travel to D.C. for Flag Day, there is actually a “Graduation” day – where the new FSOs are sworn-in and welcomed to the State Department as official diplomats.  For B, the swearing-in took place a week after Flag Day.  B’s mom stuck around for the week (which was great fun for me and C) so we could all attend the swearing-in together.  Unlike Flag Day, which takes place at FSI, the swearing-in takes place at Main State – or the main State Department building in D.C.  This was especially nice for us since we have three friends who work in that building (two of whom are the folks we visited in Mexico and who got B interested in this life in the first place) who we’d be able to see.  One of those people happens to work directly for the Secretary of State, John Kerry, who was the speaker for the event, so I was looking out for her from the moment we walked in. 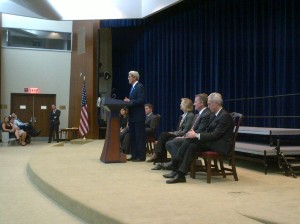 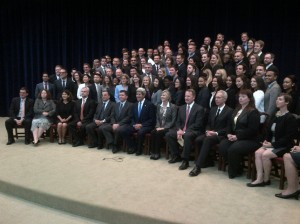 Turns out she was the one person who I didn’t get to talk to, but she also provided B with a fabulous surprise.  The Secretary seemed genuinely excited to be welcoming these new diplomats to their new life, and he spoke for quite a while about the importance of their jobs – and the jobs of all FSOs and employees of the State Department – to aid in the diplomatic mission of the United States.  It turns out he actually spoke for a bit longer than he was originally scheduled, which meant he was late for his next phone call, which meant that B’s surprise was a bit rushed.  At the end of his speech, he stepped down, looked around to B’s class and said “Where is J’s friend from law school?”  Technically, B is not “J’s friend from law school” – I am, but B is J’s friend, so she pointed him out and the Secretary said, “Come down here so we can take a picture.”  B tried to get out of it, but Secretary Kerry was having none of that, and when your boss’s-boss’s-boss’s-boss’s-boss tells you to get to the front of the class and have your picture taken, you do it.  So B climbed down and stood with the Secretary and our friend J and had his picture taken.  Pretty. Damn. Cool.

Bizarrely, when the official photographer sent along the picture it seems that J, B and S (which is actually what he is called by many FSOs when they are not directly addressing him) were looking at someone else’s camera.  No one can figure out who took the picture or where the picture might be, so all I’ve got is the one above, but you get the idea. 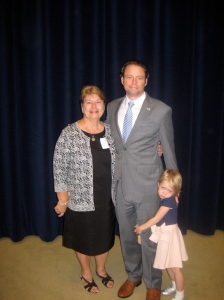 C does NOT like to have her picture taken… 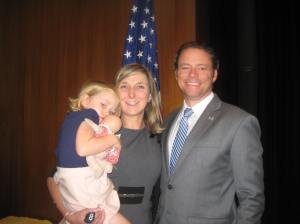 SO, there are several asides to this story (as there generally are with all my stories, in case you hadn’t realized).  First, yes, seriously – the trip was, pretty much, courtesy of Volvo.  In our quest for a new car we had been pointed to the Volvo Overseas Delivery program by a friend.  Turns out that, if you buy a Volvo directly from the factory, and then go to Gotteborg, Sweden to pick it up, you get a pretty awesome deal: two round-trip tickets to Sweden, a car from the airport to the factory, a personalized “introduction” to your new car, a tour of the factory (with Swedish meatball lunch included, of course) and one night at a local hotel.  If this weren’t enough, you also have the option of taking your new car and driving it wherever you can get to in Europe for 14 days with paid insurance.  You can then either return it to Gotteborg for free transport back to your local Volvo dealership in the U.S., or you can drop it off in any number of other European ports for a small fee.  Then you fly home and 4-6 weeks later, voila, your car shows up at your dealership and you drive it home.  We opted, after visiting FS friends (J and her husband, N) in Brussels, spending a day driving around Paris, and spending two days in Amsterdam, to drive to Hamburg, leave the car there and take the train to Copenhagen for a few days before flying home.  It was a fabulous trip made all the better for being basically free. 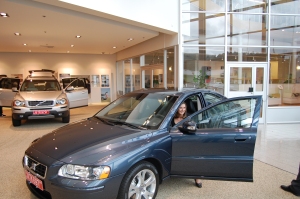 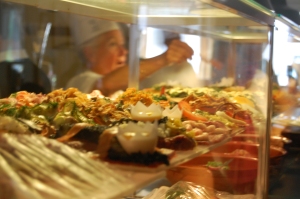 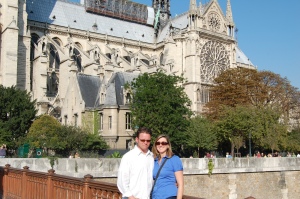 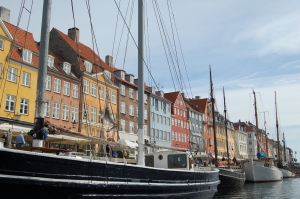 The second aside relates to the actual dropping off of the car.  As an English speaker with some French ability in my back pocket, most of my travels have taken me to places where one of my two languages was the official language,  where (as is the case with the Netherlands, Sweden and Denmark) everyone speaks English BEAUTIFULLY, or where the language is close enough to French that I can at least  get the gist of what I’m reading or hearing (Mexico/Spain).  Germany was a whole different world for us.

The Hamburg port authority is not the bastion for English speaking Germans, that I can say with certainty.  When we arrived at the locked and guarded gate we were met by a man who clearly knew not a single word of English.  We, conversely, knew not a single word of German.  What followed was a pantomime of idiocy by me.  It’s one thing to use hand gestures to indicate a direction, or that you want to eat or drink, but I was lacking in the appropriate hand gestures for indicating that I needed to drop off my car for transport by boat to the U.S.  Much hilarity ensued (on our behalf, the German guard did not seem terribly amused).  We did eventually get in (after several phone calls by the guard to someone else – heaven knows how he described us) and drop the car off.  Then we had to navigate (via taxi and subway) back to the city center of Hamburg to catch our train which, I promised B, would be on time (it being a German train).  We made it to the train station with only minutes to spare before our scheduled departure only to find a sign in German which included the words “120 minuten spat” – which, we figured out, meant that our train was 120 minutes late.  So much for on time trains…but this 120 minute delay gave us enough time to find an internet cafe so B could sign up for the FSOT, and as they say, the rest was history…