Our house in Canberra has a fantastic back yard. Some green-thumbed former FSO took the time to plant dozens of roses, azaleas, and other assorted flowering plants and it gives a totally inaccurate picture of the current residents’ gardening skills. Frankly, I’m terrified that my slightly-less-than-green thumb will be the death of all of them. 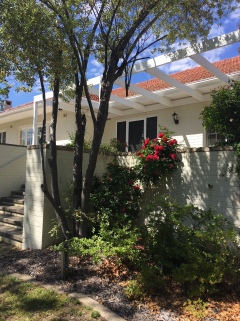 I’ve been puttering around, watering, fertilizing and trying my best to keep our garden in the manner to which it has become accustomed, but it’s still unclear how successful I’ll be.  After being limited by extreme African temperatures for the last two years, I’ve also been tempted by just about every cooler weather loving plant I stumble across. Lavender, rosemary and blueberry plants have all made their way from Bunnings (the Australian equivalent to Home Depot) to our house. I’ve also bought every herb (pronounced like the man’s name here, not “erb” as in the U.S.) I might possibly use in my cooking. The only problem is that I’m now paralysed by the fear of killing every one of these plants when I replant them either in larger pots or in the ground – the result of which is that they are all still in the original pots and I’m finding every possible excuse to avoid relocating them to more permanent homes.

Most of my excuses relate to all the other important things I have on my daily agenda. Ready to re-plant? Nope, gotta do laundry, or make dinner, or go to the grocery store, or walk the dog. Just about anything seems to trump the terrifying prospect of prying roots from a container and relocating them.

Then, on Saturday B gave me what I consider to be not only a totally legitimate excuse, but one that so far no one has questioned: a swarm of bees living in our yard. 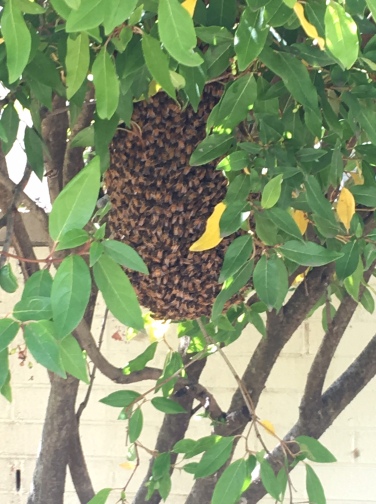 I’ve long suspected that there was a hive of bees in the large gum tree on the edge of our property. I can hear a near constant buzzing when I’m outside during the day, but since I rarely see actual bees I wasn’t too worried about it. Then B came in from playing soccer with C and said, “Um, you’d better come outside and see this.”

We walked to the front of the house where, just hours earlier, I had been pooper-scooping, and B said “bend down and look under that tree.” And there, hanging off a branch about 2 1/2 feet above the ground, was a massive, vibrating bunch of bees.

They seemed totally uninterested in us, but there was a steady stream of them flying in and out of the swarm. It was misshapen, with a basic bullet shaped core, but with large lumps protruding from various places. When I made my way outside early the next morning, however, it was an almost perfect half oval hanging from the branch, buzzing and quivering, and effectively making our front yard a no-man’s land.

Bees are fascinating. They make one of the sweetest most amazing substances known to man, but they are also capable of killing a human being. But what I thought I knew about bees was nothing compared to what I learned from our new friend Eric, a local beekeeper who helps out families, like ours, when bees suddenly appear (cue Carpenter’s music and a slight change in lyrics…).

In a nod to Monty Python, Eric is really a half-a-bee keeper – since bee keeping is a hobby, – but he still managed to find time in his weekend and very kindly came to our house on Sunday morning to help us with our “little” problem.

When he arrived, Eric walked right up to the swarm and looked at it while bees flew around his head. “That’s a good sized swarm,” he said. “Um, yeah,” I thought. “Thanks Captain Obvious. Now what are you going to do about it?”

Eric returned to his Ute (that’s “utility vehicle” for our non-Australian friends), pulled out a beekeeping hat and veil, and then walked straight back to the tree, positioned his bare hands on top of the branch that held the bees, and started shaking. His BARE hands people. Inches from the bees – shaking them. B and C and I stood back, mouths agape, ready to flee for the hills, but Eric just calmly put the top on the box, poked a couple of holes in the side and top, and then sauntered over to us – totally unstung.

Eric was also not only full of interesting bee information, but was also pretty funny as he demonstrated the bee “waggle dance” and explained how it was that tens of thousands of bees came to be – literally – hanging around our backyard.

It turns out that swarms of bees are not unusual around Canberra in the spring. After a new queen is born she proceeds to steal half the hive from her mama and then she and her swarm find a “way station” – an airport lounge was Eric’s analogy – while scouts go out to find a more suitable permanent home for the new hive. Our tree was the way station in this case.

Once Eric shook the queen into the box all the rest of the bees followed, mostly climbing in through the holes Eric had made. Eric then picked up the box, put it in the back of his Ute, and bid us adieu. In the case of our bees, no scouts will be needed as Eric will kindly provide a hive for the new swarm, and presumably the bees will kindly provide some honey for Eric. We’ll have to get our honey from the grocery store though – at least until I can convince B to let me add beekeeping to my “What will D do” list…