The D.R.C. (or “My Congo” as it will be henceforth known to distinguish it from the Congo on the other side of the river, the “Republic of Congo”) is one of the richest countries in the world in terms of natural resources. Most nations could only dream of possessing the vast variety and depth of resources found here. But, unlike the U.S. and Canada, the riches here have been rarely seen by the country’s own people. Instead, for hundreds of years Europeans (primarily Belgians, but the Portuguese, French and English can’t claim total innocence) pillaged this country in a way that is hard to describe and harder to accept once it is described. Add to that the history of violence that has plagued the D.R.C. since it’s independence and the images that most frequently appear beside the word Congo are, to put it mildly, bleak. But this is not a bleak place. On the contrary it is a place of light and unexpected beauty, despite its dirty and unlovely aspects. And the abundance is, even on a micro level, amazing.

Every couple of days a wizened (love that word, by the way) old man named Papa Clement shows up at my door with boxes and boxes of fresh vegetables. The bounty is overwhelming and I haven’t been able to stop myself from totally overindulging every time he shows up. The result of my inability to control my vegetable buying has been hours of wonderful time spent in our kitchen.

In the last week I’ve made: gazpacho, eggplant parmesan, cabbage and apples with sausage, ratatouille, guacamole (twice), moussaka, zucchini-banana chocolate chip muffins (twice) and an assortment of carrot side dishes. All of it (well, except for the sausages) with produce brought to my door by Papa Clement. 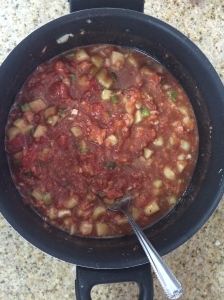 If he doesn’t have a vegetable I’m looking for, then I can go to Shoprite and buy it – it takes more effort than in the U.S. (no weighing and taking veggies on your own here – there is a dedicated person to whom you bring your produce who weighs, bags and tags it with a price in the middle of the produce section), but most of what I’ve needed I’ve been able to find.

Some things are wildly expensive by U.S. standards. Last week I bought a bunch of asparagus (C’s favorite) for about $14. Yesterday they had strawberries – a quart was about $18. Broccoli is routinely in the $15 range for a head. But other things are cheaper since they are so readily available – an avocado here? It’ll cost you about $0.50-$1 depending on where you buy it. Fresh cilantro, mint or parsley – $0.50-$1 for a huge bunch. A pineapple? $2. A mango? $0.50. Bread is amazingly cheap – a really nice loaf of crusty multigrain or white bread– cooked onsite and daily – is somewhere in the range of $1.50-$2.

There are, not surprisingly, some things that are rare and difficult (if not impossible) to get here: “real” milk, salmon, chocolate chips, Mexican food and an assortment of very “American” items like single serving mac & cheese (which C loves and I feel decidedly guilty about ordering, but which I buy from Amazon anyway). But, most things are ultimately here and available – albeit, in some cases, at a price. You just have to decide what you’re willing to pay for.

I was going to make shrimp tacos this week – homemade tortillas (another thing difficult to find and/or expensive), fresh pineapple, slaw and avocado, but I looked at the bags of frozen shrimp and discovered that a pound cost $56 (actually probably more than that as it was 56,000 Congolese francs and, while most of us do a 1:1 exchange in our heads it is not quite that good, so it was probably more like $60…). Needless to say we will be eating chicken tacos instead.  But, on the flip side of that, I found my favorite cheese (Cambozola – a mixture of Camembert and Gorgonzola) in not one, but two stores for a pretty decent price. 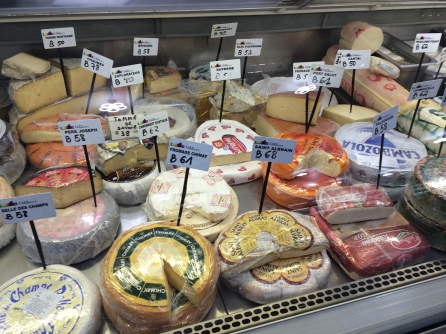 Another thing that is bizarre by U.S. standards in some of the grocery stores (City Market being the one I know) is that nothing has a price – just a number. So you find the number of the item you need, say B103, then you go to the end of the aisle and look up B103 on a long price list posted at the end of each aisle. It drives me batty. 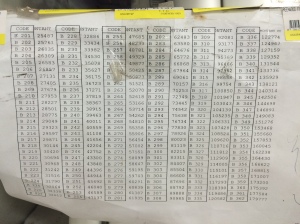 From what I’ve been told all the stores used to price items like City Market does, but now there are at least two large stores (Hasson et Frères and Shoprite) that put prices for each item directly in front of you rather than making you walk up and down aisles repeatedly to compare prices. Maybe it is the competition lawyer in me, but I keep wondering if City Market will be forced by competition to eventually change its ways and put prices on the shelves for each item. Only time (a lot of it knowing Kinshasa) will tell.

There have been pleasant surprises (beyond Papa Clement and the Fresh Produce (band name in my next life?)) and funny moments as well in my grocery buying time here so far. One of the bags used by some of the stores to package bread has a large picture of President Obama on it, so I have dubbed it “Obama Bread.”

And one of the ubiquitous brands for many items, soda, mayonnaise and water included, is “Canadian Pure.” How can I go wrong with that? 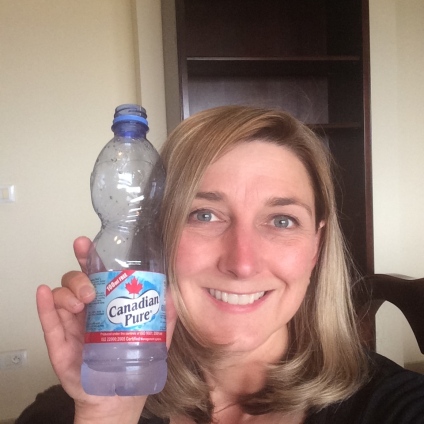 8 thoughts on “Food for thought”