In the last few weeks we have begun the business of having many holes poked in us in preparation for living in Africa.  Through those holes many foreign viruses have been injected with the hope that our bodies will be fooled into producing T-lymphocytes and antibodies so that, should we meet up with the same foreign viruses in Congo, our bodies will be prepared.  So far we’ve all had Yellow Fever, and the first two of the three Rabies series.  B and I have also had Polio and Hep B, and B has had Hep A.  “Luckily” for me I got Hep A when I went to Belize, and C got Hep A, B and Polio as part of her regular vaccinations.  Since B and I haven’t had polio since we were under 25 (only a couple of years ago obviously…) we had to have it again.  None of them have been too bad – at least not for B and me.

Unfortunately, poor C has been particularly unlucky since at her four year “well child” visit in early March she got four shots as a matter of course, and since then we’ve dragged her to the medical unit at FSI twice for three more shots, with two left to go.  Yesterday morning, when I went to wake her up, I rubbed her back, handed her a cup of milk and her first words were “Mummy, do I have to get a shot today?”  Ug.  The second time we went back she crawled under the chair in the examination room and announced that we couldn’t see her so she couldn’t get a shot.  Yeah, I wish that worked kid…

B and C will also have to have a typhoid shot, but we’ll wait until closer to our leave date for them to get that since it only lasts two years.  I opted for the “oral” typhoid pills, which means that I’m already inoculated against typhoid – and my immunity is good for 5 years.  C wasn’t eligible to take the pills, but it was an easy choice for me: take four pills over eight days and be immune for 5 years, or have a shot and be immune for two years (and keep having to get boosters).  I don’t mind shots, but why get an extra one (or two) when you don’t have to?

What was bizarre about taking the pills was that there is a huge label on the bag I was given that said “LIVE TYPHOID VIRUS.”  Uh, what? I have live typhoid in my fridge? Once I started taking them I was walking around NOVA and DC thinking “I’m walking around with live typhoid in me…weird.”  Knowing how flipped out people get about things they don’t understand I kept imagining people’s reactions on the Metro if I suddenly said “I’m sorry, I carrying typhoid inside me, could I have a seat to myself?”  I’m betting I would have gotten a whole car to myself.

And just in case anyone is wondering, all those horror stories about rabies vaccines that have to be given in your stomach are related to folks who get bitten and have to have the vaccine plus immunoglobulin, for us it was a little shot (three times over a 6 week period) in our arm – not a big deal.

The other big news is that we got our diplomatic passports – the black ones.  They sure are pretty…

These are for our “official” travel.  When we travel for fun we’ll use our regular blue passports.  C and I are planning a trip to London in September to celebrate my parents’ 50th wedding anniversary and I’m guessing we’ll use our blue passports to get into the U.K., but our black ones to get back into D.R.C. when we return.  Luckily I’m used to juggling passports having spent most of my life with two passports and the last few years with three…now I have four…wonder how many people can say that? 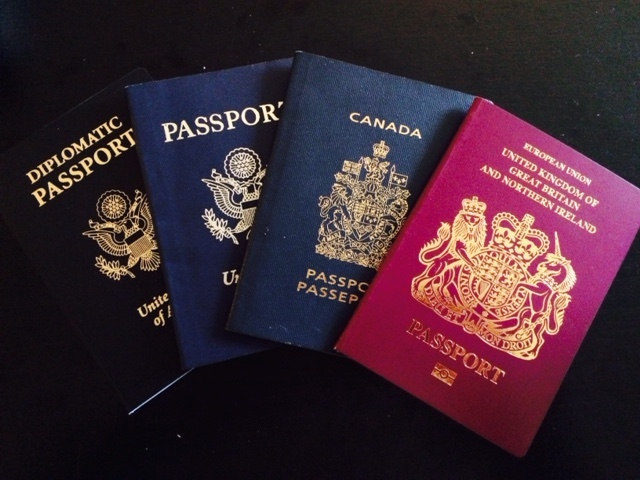 Things are definitely moving along…six more weeks of language training for B, then his consular training, then “crashbang” then…Africa…wow.