As I’ve told people our news a number of them have asked me what made B want to pursue a career in the Foreign Service, so I thought I’d share that story here as well.

If I had to guess, when B and I met at a little pub on 5th Street in 2006, he could never have imagined that 8 years later the two of us (and C; oh, and Miller the dog) would be packing up, leaving Charlotte and heading to an as yet unknown foreign city to serve our country.  He had just bought a house, and a puppy (which he used shamelessly to entice me into accepting a first date), and, I’m pretty sure, imagined his life proceeding in the typical dating, marriage, kids fashion.

And, I’ll admit that, while I’ve always had some wanderlust – and had no dog and a house I’d been in for 6 years – I also saw my life proceeding forward in Charlotte – even if not in the typical fashion.

Then, for Labor Day 2006 I invited B to come with me to Mexico City to visit my friend J, her husband N, and their new baby, B.  With us were two of my best girlfriends from law school, who, along with J, formed a multi-sided place where I, to this day, go to get the very power that often sustains me = Girl Power. J was an FSO, in the middle of her second tour at the embassy in Mexico City.

So we went to Mexico City and visited J & N in their fabulous condo supplied by the USG, we ate wonderful food (and drank wonderful drink), we toured the Mexican Embassy, we visited the U.S. Ambassador to Mexico’s home (at the time he was married to the heiress of Modelo, so their home was, uh, quite nice) and actually met him and shook his hand.  To say that this was pretty cool is an understatement.

Then we managed to top even that and the seven of us (four women and three men, we left Baby B at home) drove to Acapulco and rented a house for 4 days.  It was, as they say, the bombdiggity. We had a wonderful chef at the house and a young man who brought us drinks by the pool as we lounged.  Let’s just say this, too, did not suck 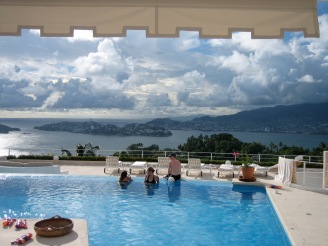 During this trip B talked a lot to J & N; he asked them a lot of questions about their lives, how they had gotten interested in the FS, and what had led them to Mexico.  And, while no one was under any illusion that the way we lived in Acapulco was in any way the way an FSO typically lives, the prospect of visiting and living in these amazing places got under B’s skin.

I didn’t have enough interest in the overall workings of the State Department and foreign policy (especially given that I was, at that time, not even a U.S. Citizen) for it to peak my interest the way it peaked B’s, but I’ve always had an interest in adventure, so I have been, and still am, B’s biggest supporter in making the dream that was born in Mexico a reality.

J and N have amazing careers in the FS – and I can only hope we get as lucky as they have been in that respect.  This is a once in a lifetime opportunity and I’m so grateful that we have them (and our friend P) to help us along the way.

And we may find ourselves in another part of the world…

One thought on “Well…How did I get here?”