So, you’re walking along and suddenly you come across an AK-47 lying in front of you.  What do you do?

A couple of weeks ago that is exactly the way I would have answered that question, but now that I’ve spent a week at the Foreign Affairs Counter Threat (“FACT”) training, I could, with some level of confidence, carefully pick up and “make safe” said weapon by removing the magazine and any unfired bullets all while keeping it “muzzle safe” (ie: not pointing it wildly at anything other than the ground).

All that being said, I suspect my first reaction would still be to run away. Far, far away.

In addition to my “make safe” training on guns, I can now also put on a tourniquet (in case you are bleeding profusely), and know how to look for IEDs that might be on my car. I hope I will never need any of this training, though as someone who learned to drive in Canada I have used the “skid control” lessons on more occasions that I care to count.  I’m guessing I won’t need to worry about skidding on icy roads in Kinshasa, but who knows about muddy or rainy roads…

Don’t worry – I’m not giving anything away here – this information is available freely on the web (after all the training we did on security I was VERY aware of not telling anyone more than was available publicly).  CBS also did a small segment on FACT which you can watch here.  Among other things it shows the two most exciting parts of the training: learning to ram a car and watching a car get blown up. 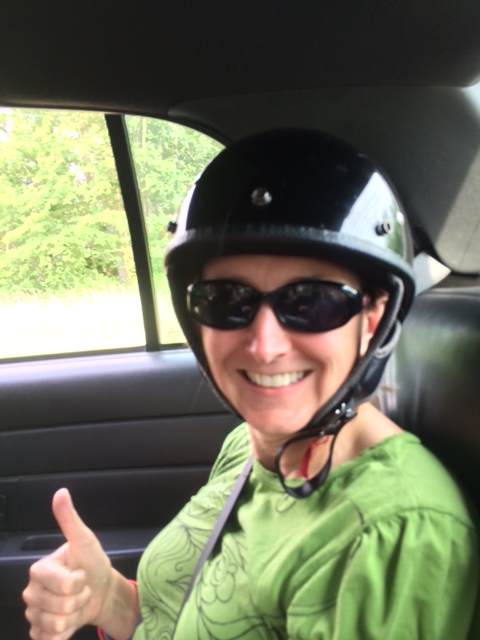 By the end of the week I felt pretty bad for the cars involved in the training.  They were rammed, shot at, and, eventually, blown up – it made me feel a little like I did in Ferris Bueller when they destroyed that beautiful Ferrari (except that we were destroying the Ferrari’s poorer cousin, the Crown Victoria).  The dummies we used to practice medical training and self-defense didn’t fare much better, but at least they “lived” to see another day.  Pretty sure the cars left the training facility and were towed straight to the scrap yard.

With my FACT training over it was back to Arlington to pack.  Lucky me, I was not only packing for our BIG move, but also for a two week trip to Michigan and Canada to visit family with C.  Since B is in the middle of “ConGen” (the general consular training that he is required to take – and not allowed to miss at all) he had to stay home. We’ll miss him, but at least he’ll get to join us over July 4th.

Packing for the trip was good practice for packing our suitcases for July 26, though I think I’ll have to cut back on the clothes I put in my carry-on bag.  Packing it to the gills when you are driving somewhere is fine, but I have a feeling the airline will not consider it “carry-on compliant” in the overstuffed state in which it entered the car.  No matter though – for now it just needs to get us through the diversity of weather from 90 degrees in Arlington to 53 degrees in Northern Michigan/Northern Ontario, not the scrutinizing gaze of a random rules obsessed flight attendant.

Our tickets to Kin are now officially booked – including the dog (after many hours on hold with Brussels and United airlines) and our consumables pack-out is schedule for the week B is at FACT. Now we are just waiting for our final dates for pack-out of our HHE and UAB and then we’ll be all set and ready to go on July 26…we hope.